A minimal end-to-end example of creating a nbdev project from scratch.

This section assumes you have gone through the tutorial. The following is a minimal example of creating a nbdev project from scratch, with some commentary around why certain things work the way they do.

For this example, we will use code from Allen Downey's excellent book, Think Python 2, particularly the Card module. We will not cover all the features of nbdev as we focus on providing you with just enough information to become productive. We recommend reading the rest of the docs when you are done with this example.

Per the instructions in the tutorial, we will make a new repository using the template. In this case, we make a repository called deck_of_cards:

Note: If you plan on writing installable Python modules, we highly recommend naming your repo after your python module. 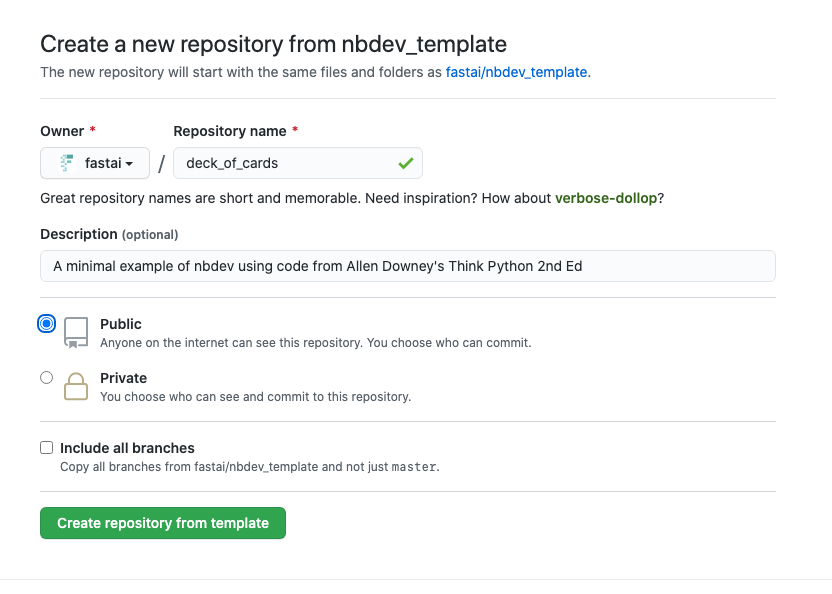 After you do this, you will have a repo with the necessary files to get started. You should also setup nbdev and install the githooks per the instructions in the tutorial.

Editing settings.ini is required for nbdev to work properly. These settings are used to populate required information for you to host documentation on GitHub Pages, as well to publish your modules as packages to pypi.

These are the fields that we changed in settings.ini:

Note: the value for user wasn’t actually changed in this example, but you will have to change it to be the org corresponding to your GitHub repository (usually your username) on GitHub.
The values in settings.ini file are propagated to various systems for you automatically, which help minimize boilerplate and learning complicated configuration files. For example,

Step 3: Write Code (Or Copy/Paste Into A Notebook)

Next, we take the Card module from the ThinkPython2 repo and write it in nbdev.

The first step is to copy and paste the Card class from Card.py into a new Jupyter notebook, which we have named 00_card.ipynb. Copying and pasting code from python files is a reasonable way to convert existing python scripts into Jupyter notebooks. A useful trick for copying big blocks of code into notebooks is to copy the whole file into a single cell and use ctrl-shift-minus to split the code into separate cells.

If you are trying to convert an existing python project to nbdev, we recommend incrementally converting specific files to nbdev over time. Specifically, we recommend choosing one python file to begin with like the example with card.py shown below.

Note: The number at the beginning of the filename is not required; it is a convention we use to keep notebooks in a desired order when they are sorted by the the file system.
In the first cell of the notebook, write a comment that looks like this (this is not required but we do it here to highlight an important feature of nbdev):

In this case, the argument card specifies that code exported from this notebook will be placed in the destination card.py by default. You can read more about how python modules are created from notebooks here. A reasonable way to arrange the notebook will be like this: 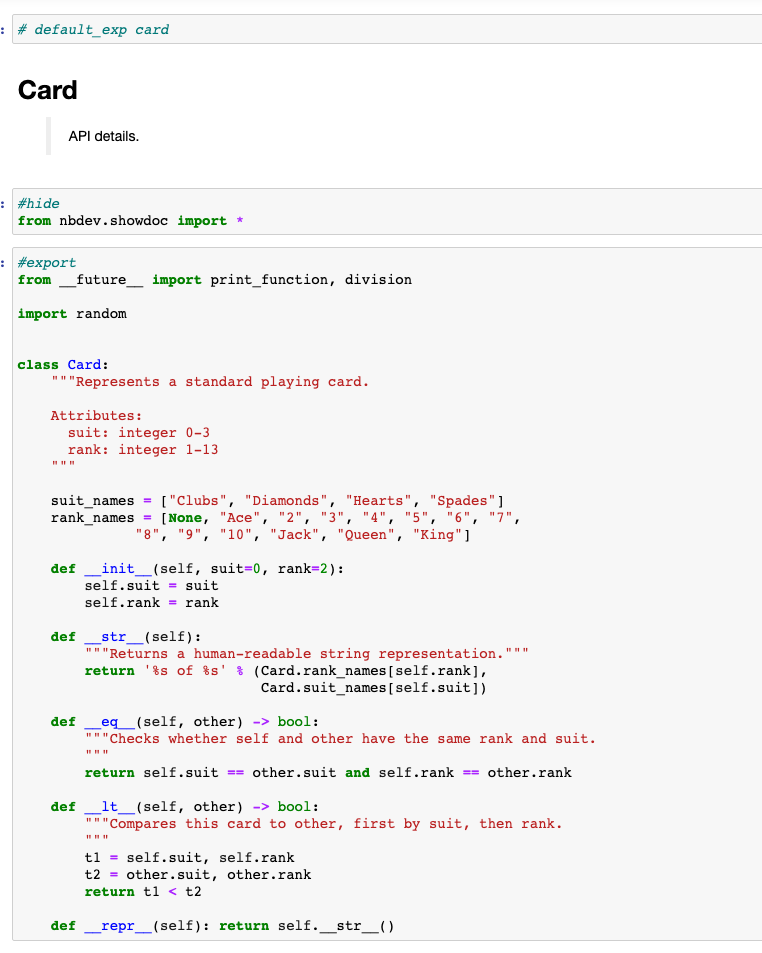 nbdev uses special comments, or flags, as a markup language that allows you to control various aspects of the docs and how code is exported to modules, and how code is tested. In addition to default_exp, the the following other flags are present in this notebook:

Note: This comment instructs nbdev to hide this cell when generating the docs.

Note: This comment instructs nbdev to export this cell to the appropriate python file. When no argument is provided to export, this defaults to the module specified by default_exp as described above.

Where The Magic Happens: Write Documentation And Tests

In the original code base, tests for Card are separate, located in Card_test.py. Furthermore, the documentation for Card is primarily located in the book folder of Allen's repo as well as some documentation in the docstring. While this is a typical arrangement for a Python project, we believe nbdev can make your workflow easier by organizing the docs, tests and source code into a single context. We believe this allows developers to write higher quality documentation and code, and encourages more testing.

Here is what the documentation + code looks like for Card: 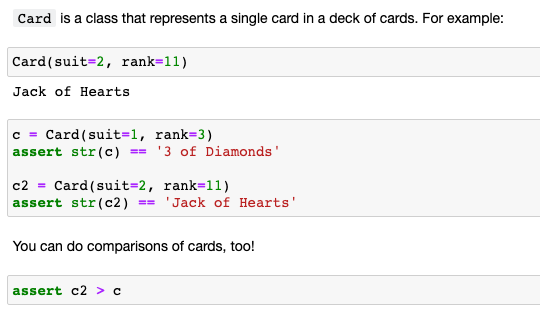 These comments and tests are rendered by the documentation system which is discussed in a later section. Furthermore, the assert statements automatically become tests that are run by the continuous integration system setup by default in nbdev in your GitHub repository.

Note: The nbdev programming environment comes set up with a continuous integration (CI) system for you. You don’t have to do anything extra to enable it, and it starts working immediately. This is especially great for people who have no experience with CI; it is a gentle way to start using it.
Important: There are testing utilities provided by fastcore’s testing utilities, which provide wrappers around common types of assert statements and also provide better default error messages. Using these is optional, but recommended.

nbdev repositories require a notebook named index.ipynb, which is included in your repository when you use the template. index.ipynb serves two purposes:

You will notice the following boilerplate in index.ipynb:

You should remove this line of code or comment it out, as it will cause a syntax error. Later, when you are finished creating your module, you can replace this with the appropriate import statement. We left this line in here on purpose so that you can experience how the continuous integration system (discussed above) warns you of errors.

Run the command nbdev_build_lib from the root of the repo. This exports notebook cells tagged with #export to the appropriate python module. For example, the notebook 00_cards.ipynb gets converted to card.py.

Run the command nbdev_test_nbs to run the code and tests in all the notebooks. This command also gets run by the continuous integration system setup for you by nbdev, but it is useful to run these tests locally to get immediate feedback.

Note: there is a way to optionally skip certain tests that are long running or slow by using special tags described here

To preview the docs, run the command make docs_serve from the root of your repo. This command runs the CLI command nbdev_build_docs behind the scenes for you, which generates a documentation site from the notebooks. After running this command, you will see a URL in the terminal indicating where the docs have been hosted locally. For the fastai/deck_of_cards repository we are using for this example, the url is http://127.0.0.1:4000/deck_of_cards/

If you navigate to the cards page at http://127.0.0.1:4000/deck_of_cards/card.html, you will see the docs that we just wrote, which we have annotated for further explanation: 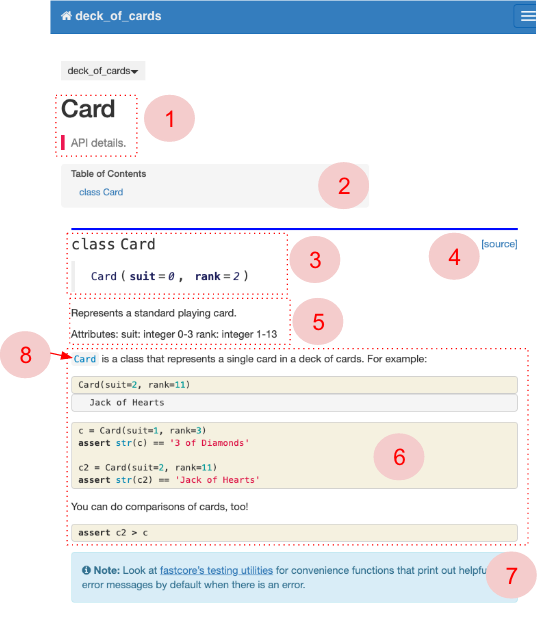 show_doc allows you to control how documentation is shown on the docs. You can control the location, order, heading and other details of how documentation is rendered. You can read more about it here. For example, this is how you can use show_doc to render the docs for the __eq__ method of Card (notice how the tests are naturally included below the documentation):

If you want to edit the docs, you can make a change to the corresponding notebook(s) and run nbdev_build_docs followed by a hard refresh in your browser to re-render the docs.

This step assumes you have already enabled GitHub pages.

At this point we are ready to push your first files to GitHub. If you have installed the git hooks per the tutorial instructions, nbdev will automatically clean unnecessary metadata out of notebooks to avoid conflicts and overly verbose diffs. Before pushing your files to GitHub for the first time, we recommend running the command git status so you can see all the files generated by nbdev for you. You will notice that the following files were created:

Make sure you add all these files to your commit with git add before you push to GitHub, because they are all needed for everything to work correctly.

After pushing your files, GitHub will rebuild your docs automatically. You can view the status of your doc build by going to your repository settings and finding the GitHub Pages section under options. When GitHub is in the process of building your pages, it will look like this:

When the page is finished being built, the color and status message will change to look like this: 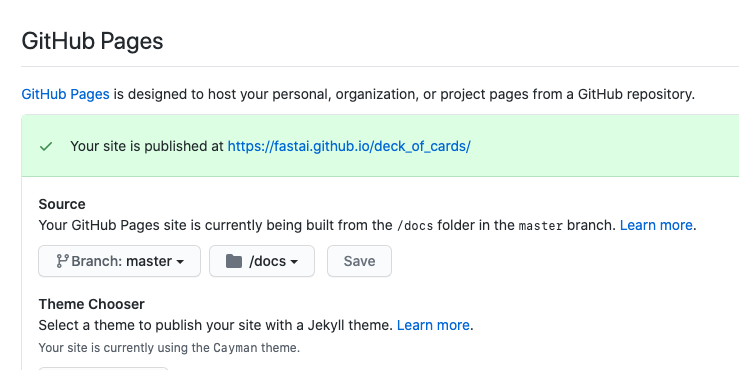 Furthermore, assuming that you have already enabled GitHub Pages, you can see the status of your Github Pages deployments at anytime. If you add /deployments to your repository's GitHub URL you will see a deployments dashboard. For example, below is a screen shot of https://github.com/fastai/deck_of_cards/deployments right after pushing new files: 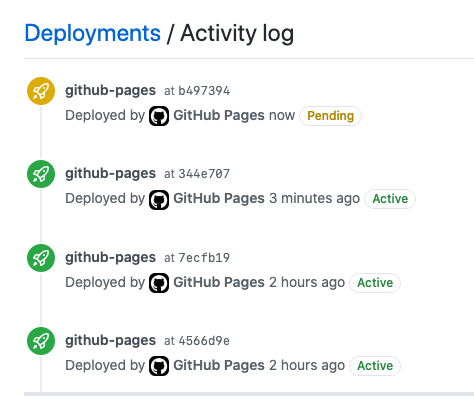 Congratulations, you authored your first piece of code with nbdev! However, to fully grasp how nbdev works, it is worthwhile to add additional code in a new notebook that imports the code you wrote earlier. Next, we will add the Deck class form cards.py into a new notebook called 01_deck.ipynb. This notebook imports the previously created Card class and creates a Deck, which is a collection of Cards: 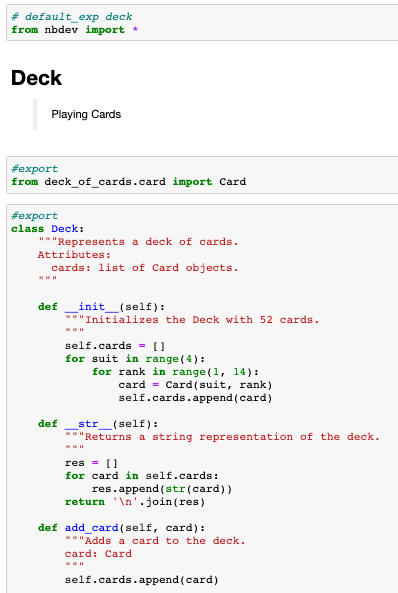 Similar to the previous notebook, the first cell has the nbdev flag # default_exp deck which means that code blocks marked with #export will be exported to the file deck.py by default. You can see that we import the Card object and export that code to deck.py with the following code cell:

This works because the cli command, nbdev_build_lib converted 00_card.ipynb to card.py, which we have imported here.

Downey's code contains a test for the Deck class in a separate file called Card_test.py. This file is a good example that highlights the strengths of nbdev. The contents of this file is as follows:

The code shown above is problematic for the following reasons:

All of these problems are handled in nbdev, as you can write code, docs and tests all in the same context. Below is a screen shot of the relevant parts of 01_deck.ipynb that expresses the code and this test in a more readable, expressive way: 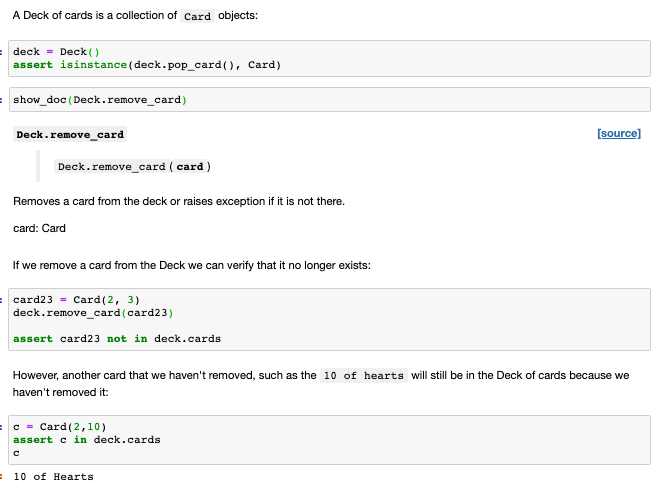 The above code expresses the same unit test, but also integrates documentation alongside the original implementation of Deck. You can view the notebook on GitHub here. One additional tool shown in this notebook is the nbdev function show_doc, which allows you to control the placement of documentation. In this example, showdoc(Deck.remove_card) will create a section in the documentation with an appropriate heading.

If you run the CLI command make docs_serve, you can preview what these docs will look like locally. Below is an annotated screenshot of what this looks like: 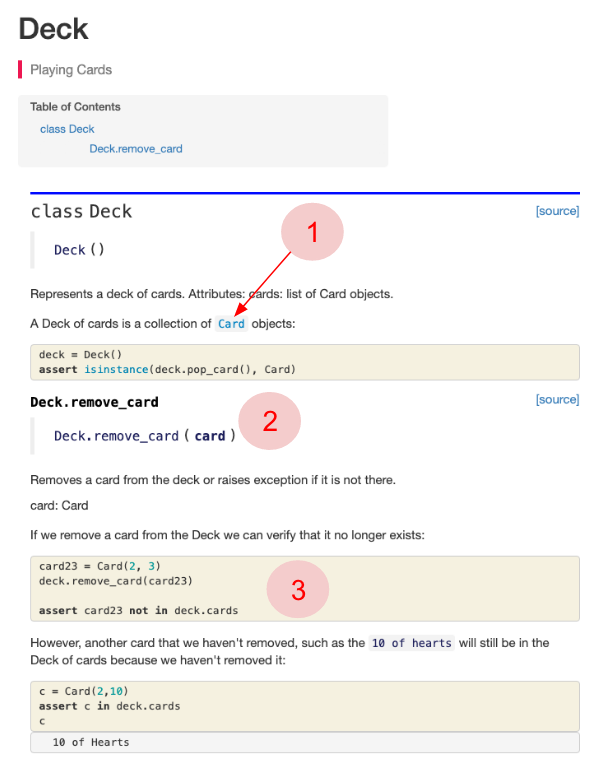 You can see this page live at https://fastai.github.io/deck_of_cards/deck.html.

When you are done make sure you run the following cli commands before pushing to GitHub.

You can publish your module to pypi by following these instructions.

All the code for this example is available on the GitHub repo fastai/deck_of_cards.

The below video shows a live demonstration of this example, with a Q&A section at the end.